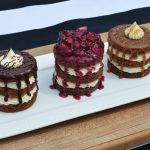 This recipe will be for the chocolate sheet pan cake to make the layers.  Fear not, the frosting is our white chocolate whipped cream frosting & the fruit topping is the same as our seasonal fruit pie filling!

Starting with a cake circle on the bottom, pipe on white chocolate whipped cream frosting, another cake layer, pipe frosting, place a final cake layer, pipe on a dollop of frosting and your favorite toppings.  We prefer to assemble cakes in advance and add toppings right before serving.

Pastry bag and a Wilton 8b open star tip to pipe in your frosting between layers.  These are not necessary, but is our preferred method.  Layers can be frosted by hand if you prefer.

If using thick caramel or chocolate sauce you can get away with adding them a few hours in advance, but the fruit compote topping will make your cake soggy if you let it sit for too long.  We recommend topping with it at the last minute.