The South Shore Kitchen recipe for creamy cucumber salad is just in time for all the gardeners out there
with more cucumbers than they know what to do. It has a creamy zesty flavor with a refreshing crunch.
It’s quick, easy and great for a crowd.

Growing up this is a dish that would grace our table quite often over the years. Grandma would make it
for holidays or when cucumbers were in season for our weekly family Sunday dinners. Honestly, creamy
cucumber salad is one of only two things I can remember her cooking. The other is rosette cookies, stop
back by in December and we will tell you all about them.

Select cucumbers that are smaller in circumference with thinner skin. If you are peeling your cucumbers
100% the skins won’t matter but the smaller size is important because you don’t want to have cucumber
slices with large, tough seeds. There are three ways you can peel your cucumbers. One, peel them bare.
Two, peel them so you still have some stripes of skin on your slices. Three, got wild and leave it all on
there. It’s completely a matter of personal preference. At South Shore Kitchen we typically decide by
the condition of the skins. If it is thick and waxy, it has got to go.

When cutting the cucumber slices, we go for about 1/8 of an inch. You can do thicker or thinner there
really isn’t any science to this recipe. You can customize it however you want. Peel, no peel. Thick slices,
thin slices, More creamy, less creamy. Dill, no dill. Red onions, green onions, no onions. Have it your
way!

Did you grow up eating creamy cucumber salad? Comment down below and let us know. 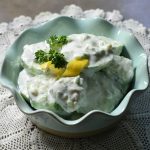